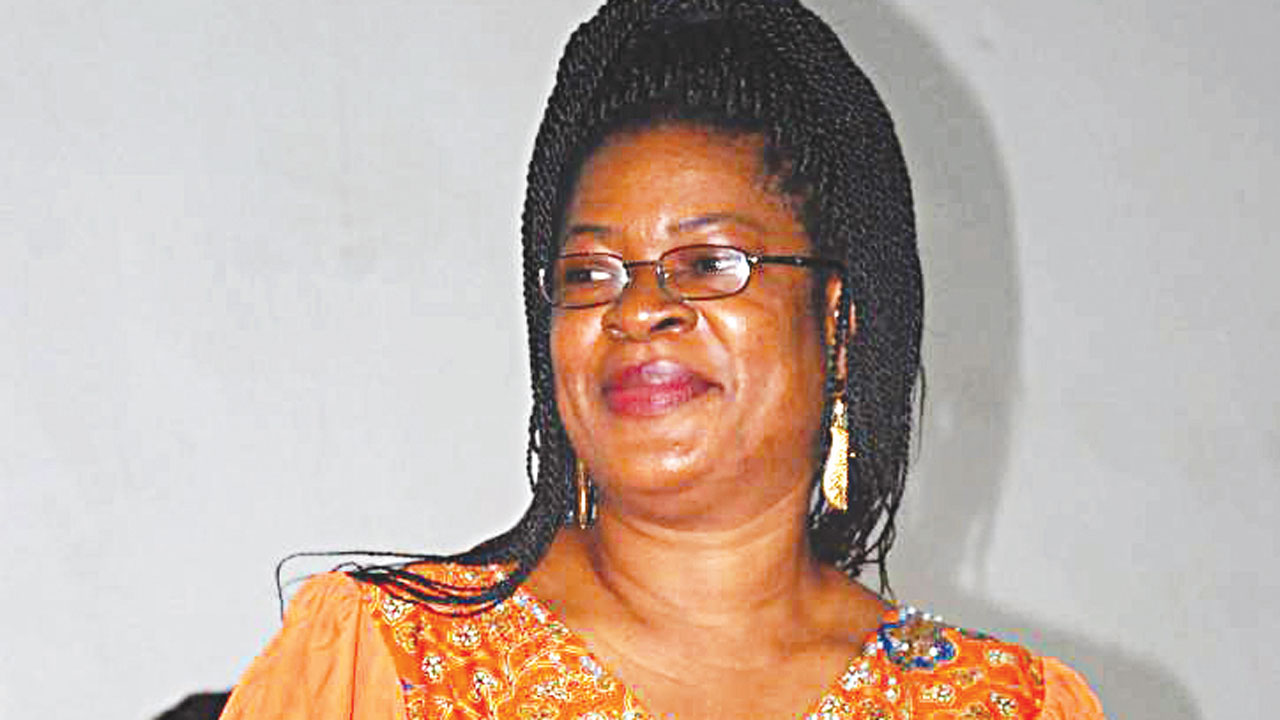 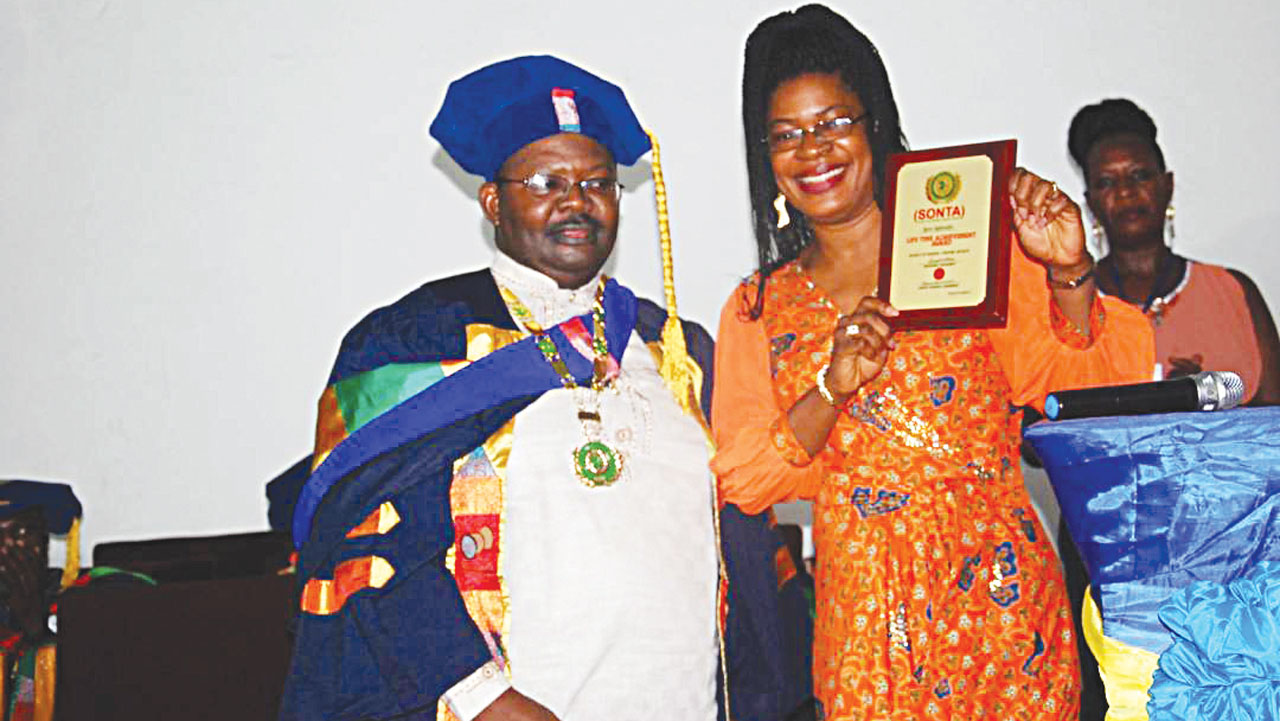 The Society of Nigerian Theatre Artists (SONTA), an association of mainly theatre and performing arts teachers and scholars in Nigerian universities, only hands the lifetime achievement award to members and other distinguished theatre professionals with a track record of distinguished service to the Society and the theatre industry.

And for this diet of the award ceremony, which held on Wednesday in Port Harcourt as part of this year’s international conference of the association, the Prof Sonnie Ododo-led former national executive council-found foremost Nollywood creative designer, Iyen Agbonifo Obaseki, worthy to be crowned a life achiever.

It was an elated Iyen who said after she was conferred with the honour that the lifetime achievement award is the biggest award she has received since she joined the industry a little near two decades ago.

“I thank God first of all and then the leadership of SONTA for this big recognition. It is the biggest award and the biggest honour done me so far. This is huge.

“I cannot describe how I feel right now by this recognition. I am so overwhelmed that all I can say is to thank God and to promise that I will continue to do my best to the growth and development of the profession, while also working for the betterment of society.

“I dedicate this to my late mum, my family and to all those who are toiling by the day for the survival of the industry,” she said, just as she added that the recognition would only spur her to achieve more.

A descendant of the famous Agbonifo-Obaseki family of the ancient Benin Kingdom, in the field of costume, make up and creative design in Nollywood, Iyen, who is current president of the Creative Designers Guild of Nigeria, an umbrella body of costumiers, make-up artistes, and property managers in the movie industry, is queen.

She is clearly a leader in that aspect of filmmaking, where the practitioners there have the responsibility of enhancing the natural looks of those on set, create monsters, vampires or achieve a deep gash in the flesh or wounds, spurting blood and other horrid looking creatures.

They call them costumiers, or better still, make-up artistes. It is in this area of filmmaking that the self-effacing but inimitable Iyen is queen and clear leader.

Born in Benin City, the Edo State capital, to a seamstress and career civil servant, Iyen, a director with Nollywood Concepts Promotions was educated in Benin City and graduated in flying colours from the former Bendel State University, now Ambrose Alli University, Ekpoma, where she studied French.

A recipient of the Africa Movie Academy Awards (AMAA) crest for costume design, Iyen, also a product of the Creative Arts Department of the University of Lagos, has attended several workshops and training programmes both at home and abroad.

How did she get into Nollywood? Iyen explained: “I grew up to meet my mum a seamstress and I learnt under her. And as a primary school pupil, I handled the costuming for the end-of-the- year cultural events.

“I made some of the clothes. In fact, my mother and I used to assist my elder brother, Don-Pedro Obaseki, in costuming his productions, as a university undergraduate. This background and my interest in the theatre have probably helped me in the business.

“As a way of re-training myself on the job, I attended the ITPAN Training School.

“Also, before I got involved in mainstream costuming and make-up, I discovered that most people that were already in the business do come to me for assistance, and I obliged them.

“In 1995, I asked myself this question: ‘Since people always come to meet you for advice and materials, why can’t you too go in there and contribute my quota?’ I took on other jobs, and the rest as they say, now is history.”

A creative designer of immense credits, who is also popular as Aiwai Touch, a name that was coined from her name, Iyen, and a name she has adopted for her creative design outfit, Iyen’s break as a make-up artiste came in 1998 when she was assigned the duty of making up the artistes that featured in the award-winning epic movie, Igodo. It was the same movie that gave her the THEMA 99 Best Costumier and Make-up Artist award.

Ever since then, there has been no looking back for Iyen, who has costumed such hit production as Igodo, Izaga, Evil Thing, Real Love, Missing Angel, Cinderella, Deep Secrets, Brave Soldier, Prisoner of Passion, among others.

She has equally worked on a number of stage plays, including Obaseki, Azagidi, and Idia.

Presently working on a number of projects in and around Nollywood, Iyen, who signed movies, such as Real Love and Fear of the Unknown as costumier, admonished all those with interest in the profession to seek to be trained adequately, “either in a formal school setting or on the job,” before hopping on the turf.

She explained that lack of training and re-training is the reason why there is a lot of mediocrity in the industry.

“A lot of creativity is required, if one wants to become a successful costumier. Therefore, to excel, a creative designer must be trained. He or she must not only be creative, but also be conversant with trends and new tricks,” she said.

Her career dream is to own and run one of the biggest make-up and costuming studios and chain in the continent.

She also longs to set up a small facility that would help train budding make-up and costumiers for the screen and stage.

“I look forward to having a studio of my own where we would have the time and facilities to do the kind of job that we should ordinarily do. With a studio, you can create well and then take your creation to location.

“You will also have room for enough research, storage and documentation,” she stated.