Everything you need to live well

Former presidents and musical royalty paid tribute to Aretha Franklin at her star-studded funeral on Friday, leading her family and members of the public in bidding goodbye to America’s “Queen of Soul.”

The service, a celebration of the life and legacy of an icon, was full of gospel, uplifting eulogies and humorous anecdotes at the Greater Grace Temple in Detroit.

The 76-year-old singer, beloved by millions around the world, died of cancer on August 16, closing the curtain on a glittering six-decade career that spanned gospel, R&B, jazz, blues and even classical music.

Former US president Bill Clinton extolled her gifts, courage and compassion, sharing his memory of her final public performance, in November 2017, when she was already ill but performed with gusto.

“I hope God will forgive me but I was so glad when I got here, and I hope you will forgive me, when the casket was still open because I said I wonder what my friend’s got on today,” he said to laughter.

Franklin was dressed in a different outfit for each of three days of public viewings, visited by thousands in her Michigan hometown. For the funeral, she was clothed in a sparkling golden dress.

“You should remember in this time about this magnificent woman. She worked her can off to get where she was. She took the gift God gave her and she kept getting a little bigger everyday,” said Clinton, playing a snatch of her singing “Think” on his cell phone.

“It’s the key to freedom. God bless you, Aretha, we love you.”

Letters from George W. Bush and Barack Obama were read out, praising her contribution to America. Gospel music and opera filled the rafters, congregants danced and one of her sons sang “Mercy Mercy Me.”

Franklin’s gold-plated casket stood on a white-clothed platform, flanked by enormous blooms of lavender, cream and pink roses, in the center of a church packed with smartly dressed mourners.

“I’m so proud of you, I know you’ll be watching me from the windows of heaven and I promise to carry our family legacy with pride,” said Franklin’s grandson Jordan, tearing up. “Long live the Queen.” 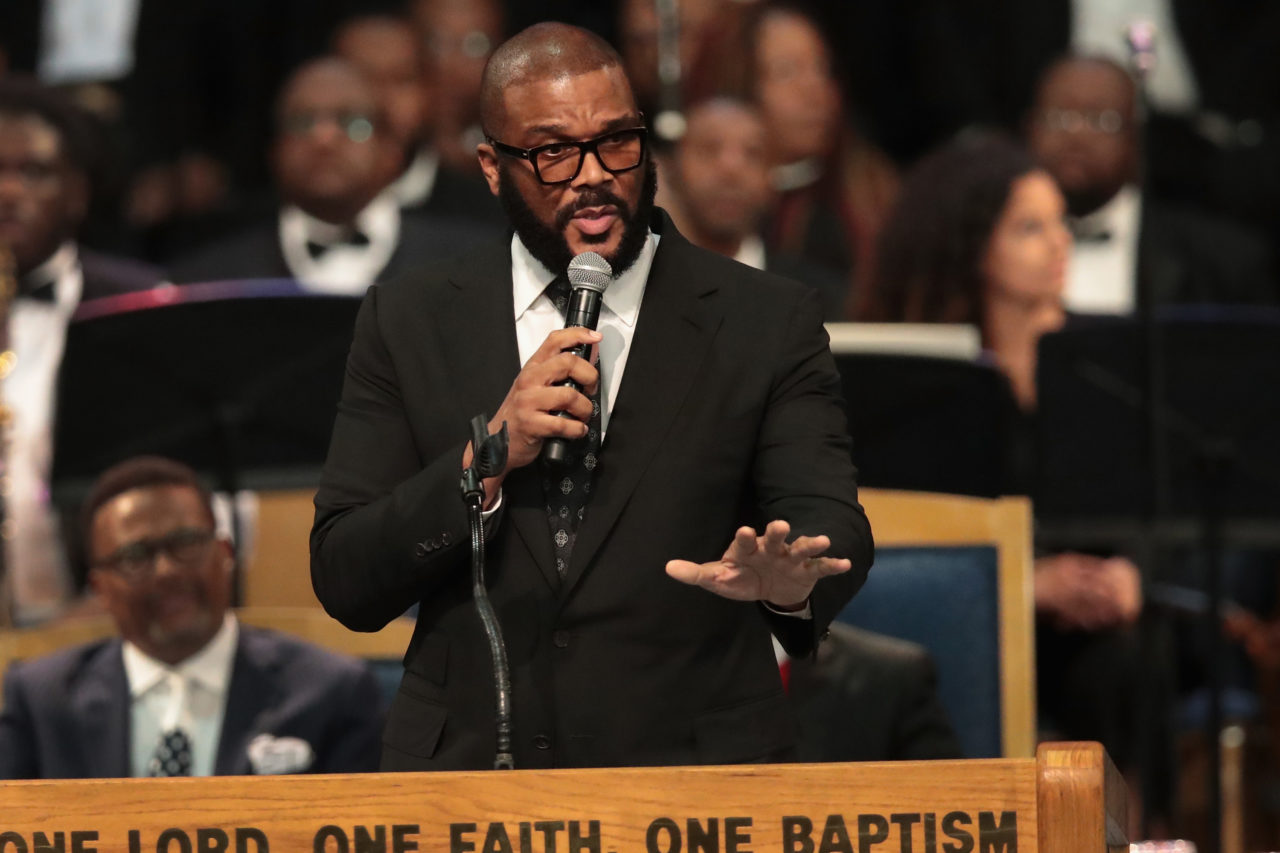 Tyler Perry speaks at the funeral for Aretha Franklin at the Greater Grace Temple on August 31, 2018 in Detroit, Michigan. Photo: AFP 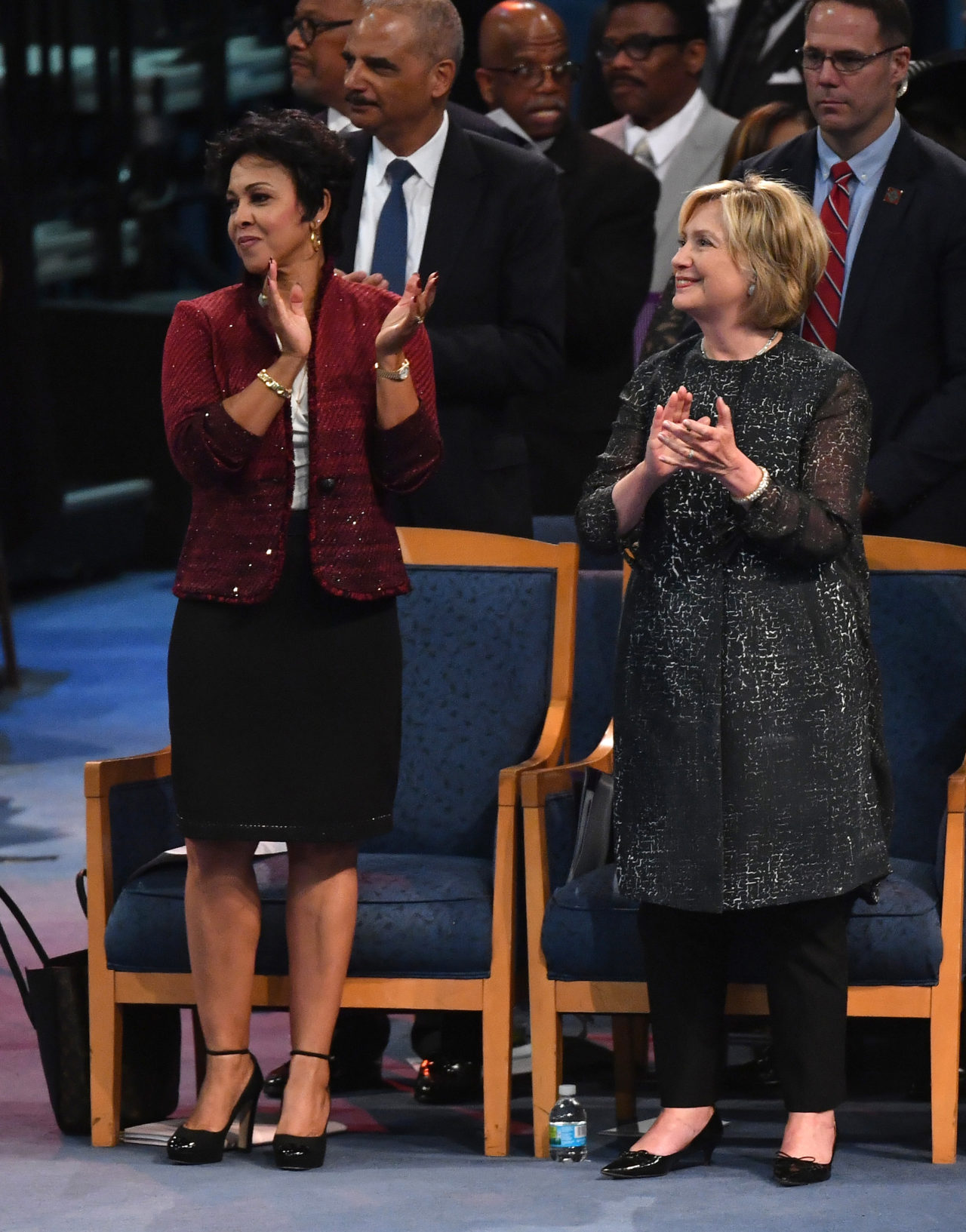 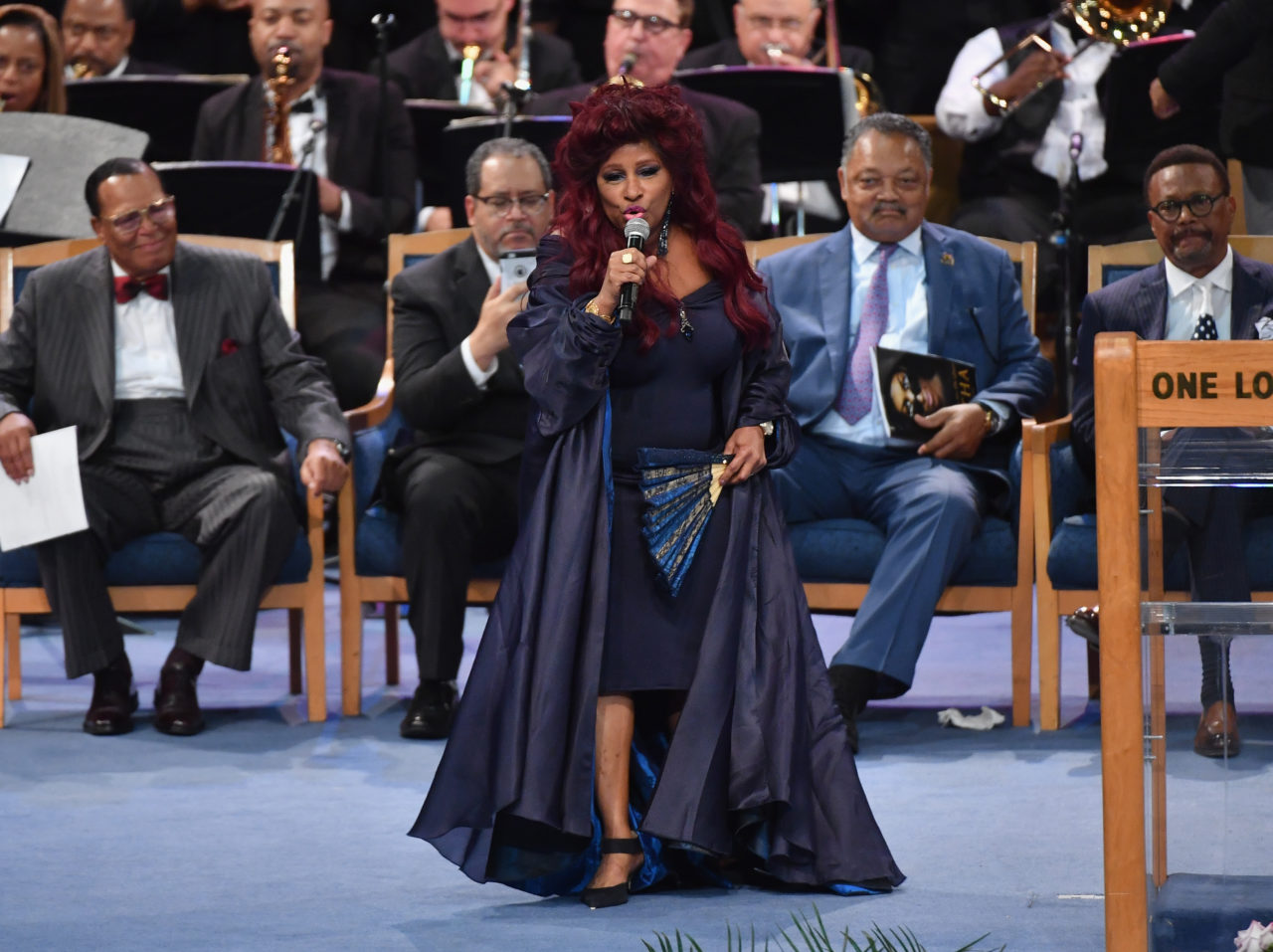 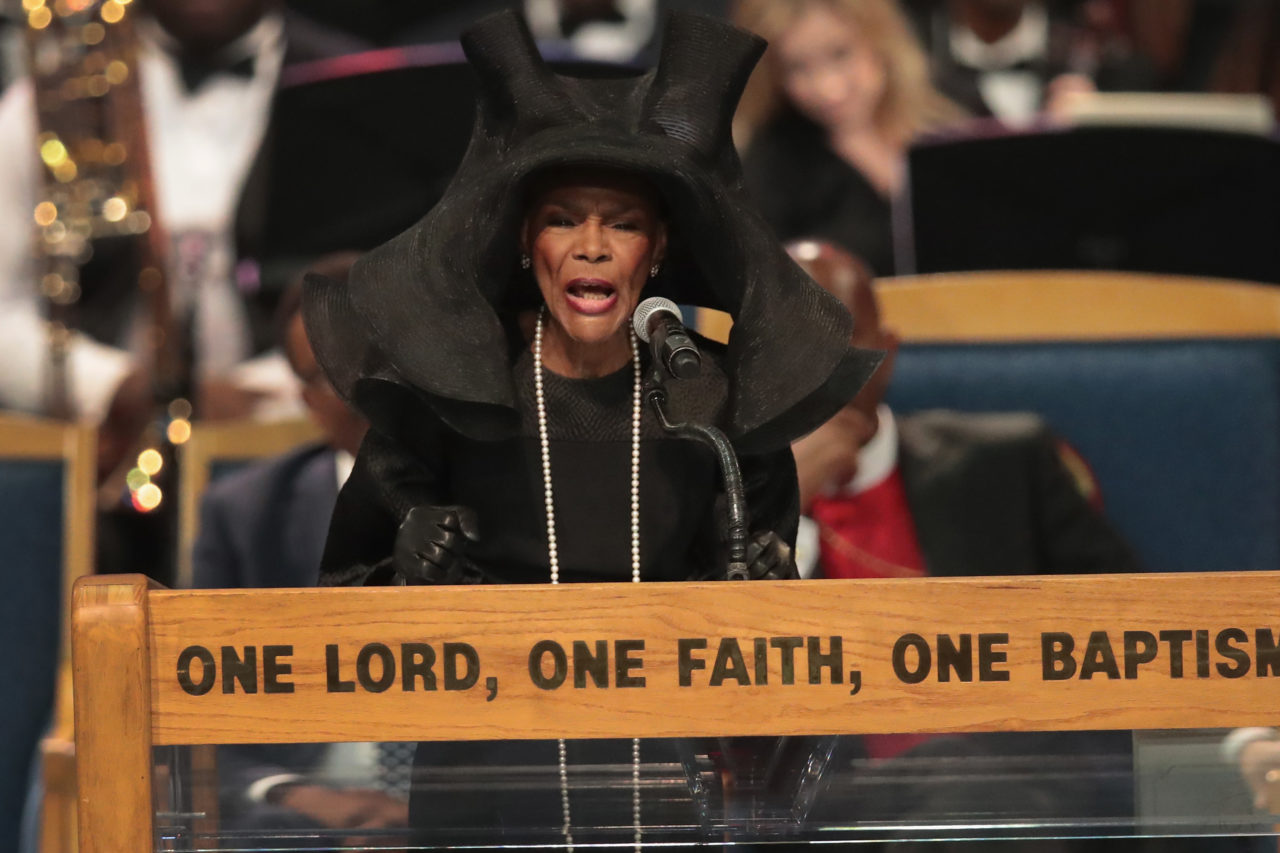 Actress Cicely Tyson speaks at the funeral for Aretha Franklin at the Greater Grace Temple on August 31, 2018 in Detroit, Michigan. Photo: AFP 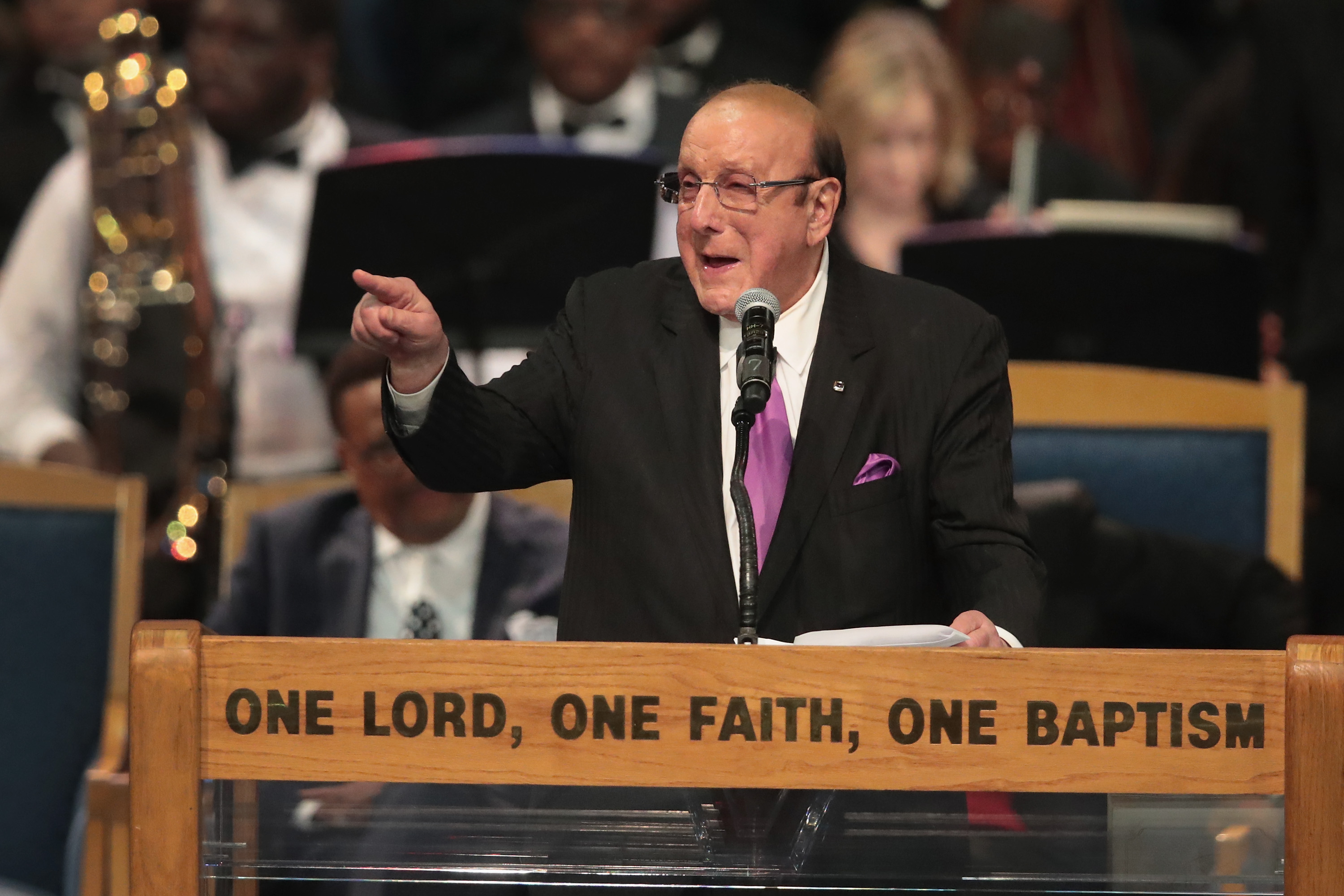 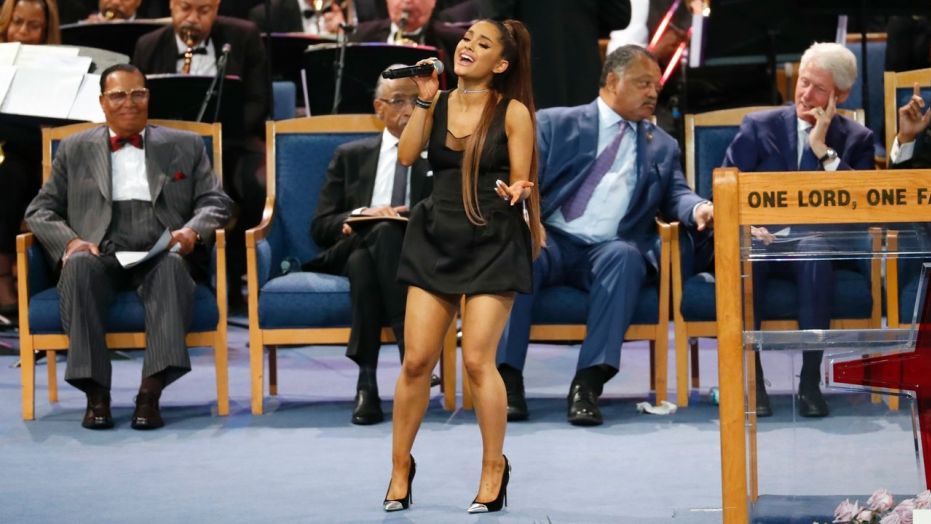 While television stars and politicians mingled inside, fans queued overnight in their funeral finery or Aretha T-shirts, desperate to be among the 1,000 members of the public allowed into the service.

Dozens of others crowded around a large screen broadcasting the funeral at a nearby gas station, reclining in beach chairs or standing in the sun, applauding and laughing at all the speeches.

“This is something that I’ll be in history,” she told AFP. “We don’t have queens and kings in America, so she is our queen.”

Detroit is to rename Chene Park — the riverside amphitheatre that hosted a tribute concert for her on Thursday — in Franklin’s honor.

She influenced generations of singers from the late Whitney Houston to Beyonce, with unforgettable hits including “Respect” (1967) and “I Say a Little Prayer” (1968).

Franklin won 18 Grammy awards and was feted for her civil rights work, raising money for the cause and inspiring activists with her anthems.

She was voted the greatest singer of all time by Rolling Stone magazine. For African American women in particular, she was a role model and a benchmark for success, feminism and empowerment.

Pink Cadillacs — some having been driven across the country — parked en masse outside the church, expected to follow her cortege to the cemetery where she is to be buried alongside her father and siblings.

They are a nod to her 1985 hit “Freeway of Love,” an anthem to her Motor City hometown, in which Franklin sang about the car, made by a company founded in Detroit in 1902.

Franklin is expected to make her final journey in the same ivory 1940 Cadillac LaSalle used at the funerals of her father and of civil rights icon Rosa Parks.

The daughter of a prominent Baptist preacher and civil rights activist, she sang at the funeral of Martin Luther King Jr., as well as the inaugurations of presidents Clinton and Obama.

She was awarded America’s highest civilian honor by President Bush in 2005.

What's New Teenage Girl Defends Her Alleged Rapist In Court, Says They Are In Love
1 day ago 0